SEE THEM ALIENS started out as a grand idea – “Let’s storm Area 51 and see them aliens!” Then people were like – “Okay!” – and suddenly millions of people planned to descend upon a small town in the desert on September 20th and storm the government facility that has lived in the land of myth for so many decades. Then, everything fell apart. Now, even the organizer of the event has backed out and called the endeavor ‘the next Fyre Fest’. But just because HE has given up; and just because WE aren’t going to be there – that doesn’t mean we can’t celebrate aliens the best way we know how – on our screens and in our hearts. In that spirit, here are some movies where you can see them aliens in the best (and safest) way possible.

This movie blew up when it was released in 1997. It was the film that solidified Will Smith’s status as the most popular actor in Hollywood (we’ve come a long way, baby), it catapulted director Barry Sonnenfeld into a list of directors that included some major heavy hitters, and it churned out the (then) dopest single of the summer, performed by the film’s star (and, no, we ain’t talking about Tommy Lee Jones). This is sort of THE film for fans of all things aliens, as the creature designs (both practical and VFX) run the gamut in terms of originality. Three sequels would follow, but none live up to the unexpected originality and fun of that first film. It’s a film that is still referenced throughout popular culture, and for good reason – it was one of the last films to come out of the 90s that was a cross-platform worldwide success.

SEE THEM: Sorry – this one is currently only available for purchase!
Strike that – we might have the VHS somewhere you can borrow…:)

A bunch of super hot WB-era kids slowly start suspecting their school is under siege by aliens that can take the form of human beings. We’re talking 1998 hot – like Josh Hartnett, Shawn Hatosy, Jordana Brewster, Clea DuVall, Usher – I mean, even the school ‘dork’ is played by Elijah Wood. Since the aliens take the form of humans, mostly what you see is actors getting to trip out and do weird things to suggest they’re ‘inhabited’ – folks like Jon Stewart, Salma Hayek, Robert Patrick, and the great Bebe Neuwirth. But this Robert Rodriguez-directed horror thriller is a lot of fun, thanks to an impressively energetic cast, a killer late-90s soundtrack, and some well-directed action and set pieces that still hold up remarkably well. When you do get to finally see the alien in its full form, it’s massive, imposing, and hella threatening.

SEE THEM: Streaming on Vudu

This bizarre E.T. rip-off is famous mostly for the rumors that it was co-financed by McDonalds. If you see the film, you’ll know why. The director is the only human being in history to have exclusive motion picture rights to the McDonalds trademark. But take away the flash of that little factoid and what you’re left with is…well…hot alien garbage. This is a terrible film. Its alien looks like a really bad test alien from a better film; its cast is mostly unknown, except for Christine Ebersole as the mother; and almost the entire plot is taken directly from that far better Steven Spielberg picture that was not sponsored by a fast food chain (merely a candy company). It’s like the writer saw that film and said – “Big Macs are the new Reese’s Pieces!” It’s worth watching just for how confusing, ridiculous, and unnecessary it all is.

SEE THEM: Streaming on Hoopla 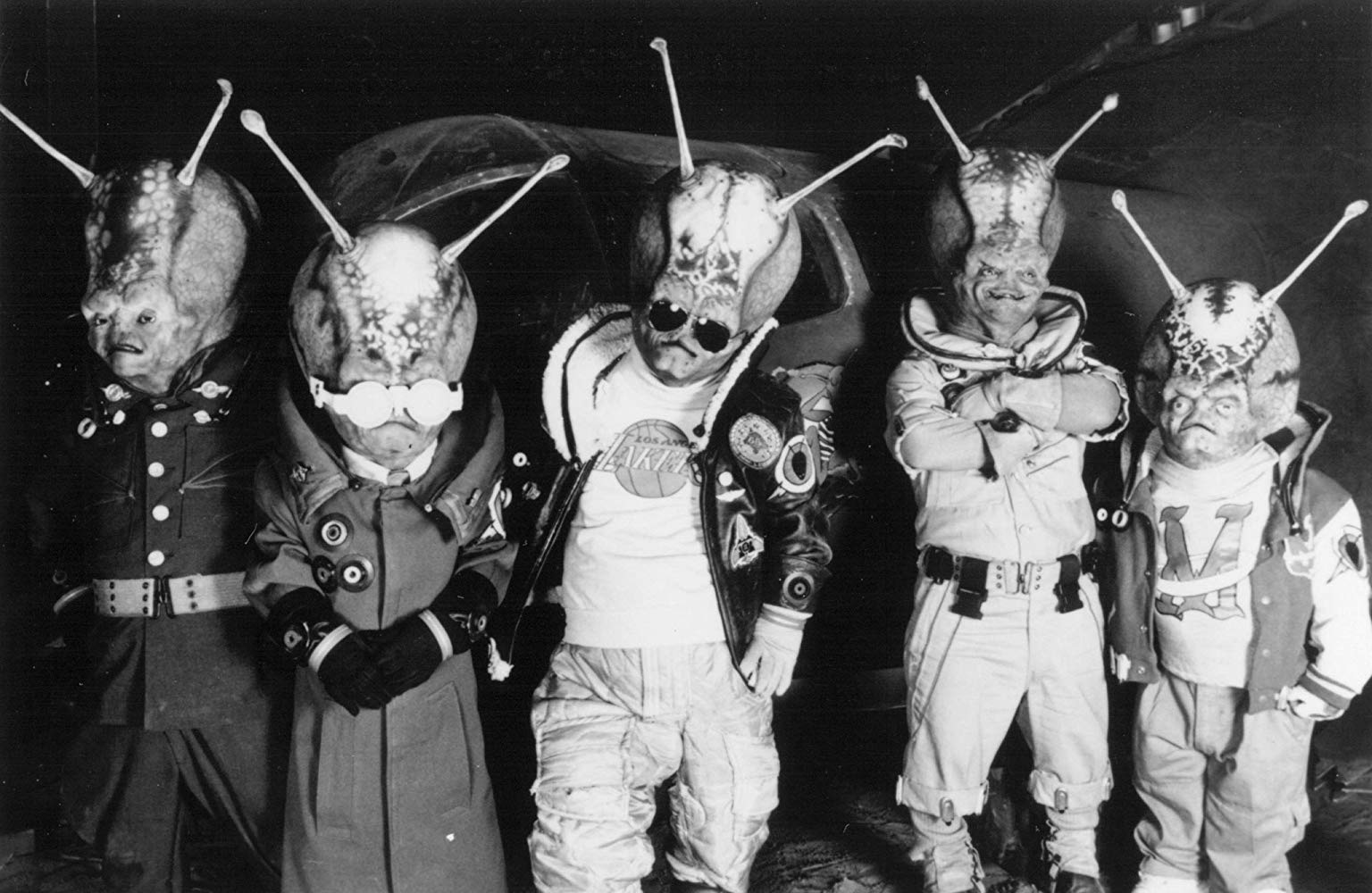 This is an obscure little number from 1990 that actually deserves more appreciation and allegiance than is currently receives. It’s a clever little romp about a team of Martians who intercept a radio signal from Earth – a signal that just so happens to be Orson Welles’ “War of the Worlds” broadcast from 1938. Of course, they don’t land in 1938 – they land in (then) present day Illinois. Though released in the same year and infinitely more clever, this film owes a clear debt to Teenage Mutant Ninja Turtles. Each of the aliens seems semi-modeled after those turtle archetypes. The cast features lots of B-list character actors, but also the great Royal Dano in one of his larger roles from the era. As a kid, I loved this film. On rewatch, I sort of felt the same way. It’s more creative than people seem to recall.

SEE THEM: Streaming on the Starz app

The aliens from Critters are certainly some of the most original you’re likely to see in a film. They’re small and furry, with razor sharp teeth, who love eating humans and can turn into balls and move pretty damn quick. There have been numerous sequels and even a TV series, but the original film is the one to beat. Here, the extraterrestrial demons land on a rural farm and start attacking the townsfolk…and, boy, do they ever attack. It’s bloody and goofy, but competently directed by Stephen Herek and memorable for its clever kills. That said – I’ve seen the series, and none of the other entries are really worth exploring, save for a weird early Leonardo DiCaprio performance in one of the later installments. This is a perfect example of franchise-itis that was so predominant in the 1980s.

INDIANA JONES & THE KINGDOM OF THE CRYSTAL SKULL

SEE THEM: Streaming on Netflix

ALIENS?! In an Indiana Jones movie?! I know, I know. This film is much maligned (and fairly so) for that last few minutes of screen time, but aliens aren’t even the weirdest thing in this picture. Dr. Jones survives a nuclear bomb thanks to a refrigerator, and there is a RIDICULOUS sequence with the actors swinging in trees with monkeys as they are chased by a heavily accented Cate Blanchett. Look – Spielberg is a great director. This film certainly doesn’t lag and it isn’t directed incompetently, but the story is all over the map and no one really knows how to balance the absurdity with the usual level of Indiana Jones charm. By the time the aliens DO show up, we feel as if we’re watching a completely different film altogether. It doesn’t help that they look FAR too creepy to be popping up at the end of a light adventure film.

SEE THEM: Streaming on Crackle

If Bob Marley, Guy Fieri, and James Lipton had a child together, it would look SOMETHING like the aliens from Battlefield Earth, the notorious Scientology-led flop produced by and starring John Travolta. It came four years after Travolta’s return to form with Pulp Fiction, and pretty much started his immediate decline, which recent films like The Fanatic show us is never-ending. This is such a vanity project, and an ugly one at that. Nothing about this film is attractive. The aliens are a muddled mess, the production design is dark, dirty, and like something out of a nightmarish futuristic Russian hellscape, and Travolta is swinging for the fences in all the worst ways, and taking the great Forest Whitaker down with him. This is Kevin Costner’s Waterworld, but actually one of the worst films ever made.

SEE THEM: Streaming on Vudu, Tubi, and IMDB TV

Saturday Night Live has made A LOT of terrible screen adaptations of their sketches. And nothing about Coneheads should have worked, coming well over a decade since anyone had ever even thought of the characters. But there is something so charming about this 1993 film that features the family of aliens as they attempt to fit in to normal American suburban society, and eventually realize they have grown more attached to earthlings than they thought possible. Dan Aykroyd and Jane Curtin are charming (and appropriately irritating), and Chris Farley has a hysterical supporting turn as a befuddled boyfriend. It’s a pretty traditional plot, with very non-traditional characters, and director Steve Barron carries it across the finish line. As far as SNL adaptations go, this one is definitely towards the top.

You’d think putting Jeff Goldblum, Jim Carrey, and Damon Wayans in a film together opposite Geena Davis would be something to behold…and it is…but not for the reasons you might expect. It’s basically about three very horny very colorful aliens who come to Earth to seduce the women here. Yeah, that’s about it. It’s weird and sleazy in that 80s kind of way, lacking of all humor and charm, and seems to be directed by someone with the prowess of a broken vacuum cleaner. Even as a kid, this film seemed just…off. Now, it feels like something that should be boxed away and never shown again. Put these actors together in a film in 2019 and I am all in. But, back in 1988, Goldblum was struggling, Carrey and Wayans weren’t really known quantities yet, and Geena Davis was hopefully figuring out how to change agents.

SEE THEM: On 10-19 in Houston and DTLA as part of our DRIVE-IN CLASSICS double-feature!

This is either the most original alien from a film, or the least original alien from a film. When a meteorite crashes to Earth, two teenage lovebirds discover the horror behind the life form attached – a creature that engulfs and absorbs living matter and then grows into an even larger ‘blob’. As the teenagers attempt to warn and save the town, the blob grows larger and larger, becoming something truly unstoppable. This 1958 sci-fi classic is the gold standard from this era of creature features, thanks to an early grounded lead performance by Steve McQueen and (then) revolutionary effects. An equally impressive, but far more horror-centric, remake was made in 1988 – but it’s the 1958 original that still holds up as a reminder of just how effective a simple premise and creature can be when written and directed with such clarity.