The Evolution of Black Romance In Cinema | Rooftop Cinema Club

The Evolution of Black Romance in Cinema

Over the course of the last 35 years, Black romance in cinema has been through a frustrating, interesting and hopeful evolution. Let’s take a look back on nearly four decades of Black love on-screen and explore how Black filmmakers have shaped the past, present and future of cinema. 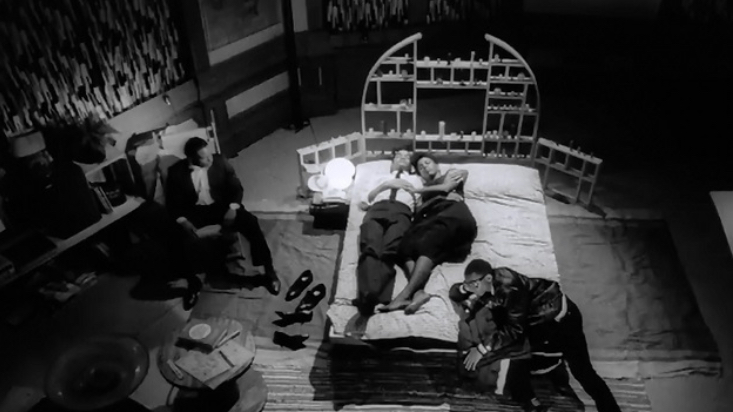 The first significant chapters of Black love onscreen begin in the ‘80s with Spike Lee’s debut film She’s Gotta Have It. When Lee released this provocative comedy, it was one of the first times in American film that a widely distributed movie centered on a Black love story (well, actually, three love stories). The film was also proudly Black, and the Black romance depicted on-screen was intentionally direct and passionate (to put it in PG terms). It was a bold step forward for Black filmmakers looking to tell love stories that reflected their life on-screen.

Throughout the early years of the next decade, the dominant genre that represented Black cinema was typically “hood films” like Boyz N the Hood and Menace II Society. These films were gritty, heavy and depicted a dramatic reality that focused more on social issues than romance.

Even so, representation of Black romance on-screen was growing in films like Eddie Murphy comedy vehicles Coming to America and Boomerang – though laughs, not love, were the main focus of these films (we get it, though; Eddie Murphy is one of the funniest people to ever live).

This was the time that Black romance movies started to make their mark. Many look to the Janet Jackson-Tupac Shakur-led Poetic Justice as a turning point. Helmed by John Singleton, who only two years prior became the first Black filmmaker nominated for Best Director at the Academy Awards, the film showcased two Black music icons on-screen. While the love story was short on affection (spoiler: the two leads only share a single kiss), its starpower and acclaim helped to expand what Black romance could look like on-screen.

Two years later, director Forest Whitaker teamed up with stars Whitney Houston and Angela Bassett for Waiting to Exhale. The film took a new approach that looked at Black romance almost exclusively from the female perspective. Like the main character in Lee’s She’s Gotta Have It, the four female leads are strong and independent. The film showed that Black love in cinema didn’t have to follow one set formula of a single romance, but instead could be represented in different ways by different types of characters. More importantly, it also made a lot of money at the box office, proving that (on top of it having Whitney at the peak of her stardom, of course) a wider audience was excited to see these stories on-screen. It solidified the now-obvious notion that Black love and female empowerment could co-exist in the same film.

In 1997, Love Jones brought Black love back through the lens of a singular love story. In this comedy-drama, actors Larenz Tate and Nia Long portray young love between a couple living in a complicated, modern world (like many of the “gen X” romantic movies of the ‘90s like Reality Bites and High Fidelity). The important difference was that this film was one of the very first times that Black romance was seen through this type of cinematic paradigm – one where Black romantic leads could be hip, artistic young professionals living in a city too! Sounds incredibly trite to think of that now, but it was a big deal in 1997. So much so that many future filmmakers have cited that aspect as being influential to their work.

One of those filmmakers is Gina-Prince Bythewood, whose modern classic Love & Basketball has become one of the most popular Black cinematic love stories of all-time. She noted that she was inspired to make the film to showcase “the things we don’t often get in Black film: a true love story.” Her film, produced and championed by Spike Lee, became a box office hit and has won over many fans in the past 20 years (it’s a fan-favorite bestseller for us here at Rooftop) by exploring a very universal theme of having to choose between romance and career. While this trope permeated post-2000 movie romances, Love & Basketball was unique in the way it centered Black characters.

What followed was a 15-year stretch of romance movies with Black characters in the spotlight, like Malcolm Lee’s ensemble comedy The Best Man (which became such a loved film over time it earned a 2013 Christmas-themed sequel The Best Man Holiday), Brown Sugar, Deliver Us From Eva, Think Like a Man, Beyond the Lights, Top Five and so many more. Black romance on-screen was plentiful and overall successful (almost like Hollywood finally figured out that these were stories that audiences wanted to see). With the incredible success of this era, another evolution in Black love stories on-screen began.

It started with the historic Best Picture Oscar win for Barry Jenkins’ Moonlight (and not just for that moment with the envelope). With love at its core and the intersection of both Black and LGBTQ+ perspectives, the box office success that followed was revolutionary. Jenkins’ next film, If Beale Street Could Talk, is another powerful Black love story that enjoyed much of the same critical acclaim. These two films encompassed many social and political aspects outside of a traditional love story, but their true focus never wavered from Black love. Melina Matsoukas’ 2019 film Queen & Slim, which also utilized social and political themes to tell an outlaw love story, continued to broaden the horizons of the types of love Black characters could experience on-screen. These films showed the huge influence of the Black romance films that came before, like Love Jones and Poetic Justice, while continuing to push the boundaries.

On a lighter note, we look at the other end of the spectrum with the smash hit Girls Trip, a riotous comedy (we all remember that grapefruit scene!) that takes influence from films like Waiting to Exhale and She’s Gotta Have It while forging its own unique path. The film’s gigantic box office (it grossed over $140 million and catapulted Tiffany Haddish into comedy superstardom) showed that successful cinematic Black romances can be joyous, wild adventures too.

Over the last 35 years, Black romance on-screen has evolved and grown for the better, but there is still a long way to go. We’re proud that many of the films on this list are regular fixtures in our Rooftop programming, and we’re excited to continue supporting the evolution of Black cinema!